Microgreens market in Japan-Past, Now and Then

Microgreens market in Japan-Past , Now and Then

The following articles are our observations through 35 years of business that we, Tagen Co., LTD, sale of materials related to cultivation and shipping of microgreens in the Japanese microgreens market.


The most popular microgreen in Japan is a radish one. Also with a long history. The radish microgreens are called “Kaiware-Daikon-かいわれ大根” in Japanese. “Kaiware” means a state where the shellfish is opened, and it resembles the first cotyledon. “Daikon” means a hoese radish in English, now It is the word in English dictionary as a Daikon.

When did our Japanese start to eat it ? It was in the literature by common people living at Osaka in the Genroku era-元禄時代- of Edo period for the first time. It was speaking that people ate it in miso soup or boiled at a famous traditional festival -Osaka-tenjin festival-天神祭り- in every July. Some reseach also is guessing that, although there is no clear literature, Japanese have ate Daikon radish since Asuka period, -a period in the early history of Japan lasting from 538 to 710-. Because of the reason, a radish microgreen is harvested as thinned vegetables in the early stage of radish cultivation, So easily thinking, it was up to the table of the farmers or was given as a gift for the nobility.

It was very recently that a radish microgreen was widely eaten in our country. It was in the 1980s. Before the times, there were a few of farmers grew it with sandy cultivation. mainly in summer in Sakai City Osaka because it was very attractive to grow it for them. The main reason were it conplete to grow in just a week, and It can be quickly big cashed since The farmers only had sold the high end restaurant as a luxury food around Osaka.

It was the first turning point when Mr.Tatsurou Maeda who lived in Fukuoa came to Osaka in end of 1960's. He met a radish microgreen and got an idea in big scale growing system. Through the efforts for 20 years to the improvement of equipment, he established mass cultivation method in the early 1980s, and succeeded in the Kyushu region by aggressive sales activities.

It was mid 1980s when the second and big turning point came to. The four start ups, Uchida Sokusei inc, Kiayou-Bokujou Inc, Gyoubuzawa inc and Nihon Kaiware Group inc, were established at the same time. They had been promoted mechanization to increase efficiency on the process , that was based on Mr. Maeda's method, to achieve the mass production system, and achieved a market expansion in the short times. At this time, it was also a shift from sand cultivation to hydroponic one.

Since the four start ups have made the farm's franchise, Many franchise farms are born in all over Japan. Of course a lot of small farmers started to grow radish microgreen, because of growing in a very short time and sellling at a high price.

It was a big joking still remained, The president from Kiayou-Bokujou Inc spoke at that times. If you could finance 100 million JP yen from the bank for purchasing equipment and franchise right, It was possible to repay the full amount of loans in that year simply by achieving 10,000 pack sales everyday.

Currently the four start ups had to finish the business clearing due to a large investment, and at the same time the franchise system had also a end. But some grower companies who were departing as franchise farms, or the other non- franchise farms continue to microgreen bussiness.

There were many companies' efforts at the same time not only in growers but also in producing and selling materials or machines for growing it. It is Akamatsu kasei Kougyou  for producing the package, it is Achilles Corporation for producing the Urethan sponge as midum, it was Hirai Kikai Machine Company for cultivation system machines, it is Nakahara Seeds for microgreens seeds and it is our company,Tagen Co., Ltd. Who sales them to growers.

It was Late 1980's when the third turning point came to. It was also the period of Japan's economic expansion. Great appeal to the high prices and short cultivation period has caused a further new entrants.At that time, it was said that there were 100 or more growers that small scale to big one across Japan. You know in that case, The radish microgreen Industry confusion had occurred. Because some growers had a got in each other’s way, start reckless sales expansion with abnormal low prices to raise sales. Therefore, Japan Kaiware Association-日本かいわれ協会-

, changed name to Japan Sprouts Association-日本スプラウト協会 in 2005, was established to converge confusion.It was in 1986. As a result, Some growers who operate shallowly could be exited.

But this was the beginning of the fourth turning point. At end of 1980's to begining of 1990's, Japanese economy was very well. It is also an era that was said to be able to sell if only made. Some growers who prefer lone wolf had an action to withdraw from the association, All growrs would have further expand sales under the rules, they had made progress in mass-production and mass sales expansion without sanitation control.

Price competition continued, oversupply, it made the prices further declined. This was also the begining of the 1990s.

It was the summer in 1996 when the fourth ,the biggest and the most serious turning point came to. It happed a large scale food poisoning incident in Sakai City, Osaka Pre, mainly caused by O - 157 . Although it was a false charge, The Ministry of Health and Welfare (now Ministry of Health, Labor and Welfare) announced that the possibility of food poisoning incident was radish microgreen, shipped from one of growers in Osaka. Because of the industry with no political power like meat or milk. As a result of survey by members of Japan Kaiware Association including the grower, It turned out that it was a completely “Not guilty ” .  They had started a lawsuit against the Japanese government. In 2003, the grower side got a win, but the Judgment was far too late. Been Continuing for consumer not to buy radish microgreens. As a result, production volume had a reduction on all growrs, a few of them stopped the business. Era of hardship had been continued for growers, for our company.

In order to continue management even strongly remaining growers have been improving sanitation management, also they started to grow more pea shoots than before, and developed new products such as broccoli microgreens at the same time. They have completed a system that can provide low cost, safe and stable supply regardless of the scale and the seasons.

In 2005, since microgreen growers have a variety of microgreens to grow, Japan Kaiware Assosiation make the name changed to Japan Sprout Association-日本スプラウト協会.

At this time, it happened to the dissociation in the meaning between originally English  “sprout” and  Japanese “スプラウト-sprout”.

It was in 2015 when the fifth and the better turning point came to. Japan Sprout Association and Ministry of Agriculture, Forestry and Fisheries completed in collaboration the hygiene management guidelines of growing “スプラウト-sprouts”

Although it deviates from the main content, In Junuary 2014, The US Department of Agriculture announced Microgreens as a highly nutritious vegetable, and need further research. This announcemeto made Microgreens more popular all over the world except Japan and have growers more increased. In this situation, Each growers can produce a few of amount except big growers who were doing business before the announcement. Its production method is similar to that of Japanese growers 40 years ago.

However, even after four years, Oddly enough, information on Microgreens has not appeared at all in Japanese mass media.

At present, There are 30 microgreen growers, 22 ones are as a member of Japan Sprout Association, and are 6 to 7 ones are as outside of them. There are three huge grower companies with more than 30 million packs per year. They supply 60% of the Japanese microgreens market in total. Recently they are considering overseas expansion, and will advance alone or tie up with local agribusiness companies, and provide the growing technology like as Aguritech company from Netherland or Israel. They aim to establish a business model of royalty income and data collection. It is aimed at the acquisition of de facto foreign subsidiaries.

In recent years, although It has been a major step forward in production hygiene control, Japanese microgreens industry also has four point of problems.

The first one is that the basic structure of machinery equipment and cultivation / shipping materials has not changed for 30 years. Because It is considered to be an ultimate efficiency system with compact equipment machines, good efficiency, low logistics cost, good retention period and reduceing production cost on cultivation .

The second one, at same time the big one is that growers not able to tell consumers the value commensurate with the products. Despite the stable large amount, they left the value and price decision to major supermarkets, fruit and vegetable markets or Brokerage. Thereby it has been in the low sale price.

Growers side by taking it to the advantage of the fact under the tacit consent, Lower-price sales prevent Companies with large financial from entering markets, and A large amount of distribution prevents small scale growers from entering.

The third one is that the production system and the business model themselves adapt to small-item mass production, but they are unacceptable for multi-item small-volume production. As a matter of fact, all growers mainly grow three type of micogreens, that are radish, broccoli and pea. The other microgreens are only grown a few amount of ones, that for example red cabbage, arugula, kale, mustard, cress, buckwheat, etc.

The forth one is that Japan Sprout Association, which has been the center of industrial development has been diminished even raison d'etre now. Because the trial is over and the guidelines is conpleted. In chipping away, All growers are moving toward reckless low price competition again without raising the product value. 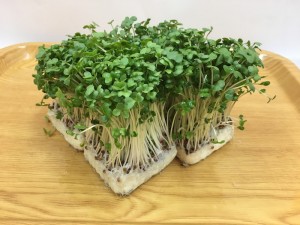 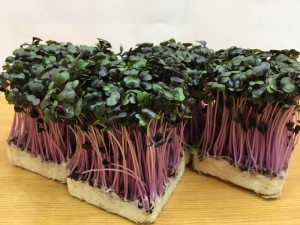 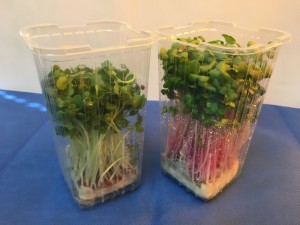 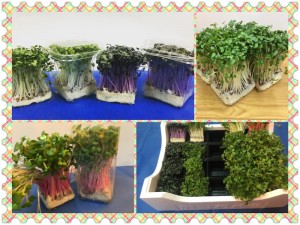 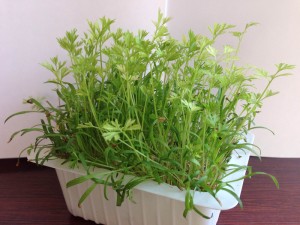 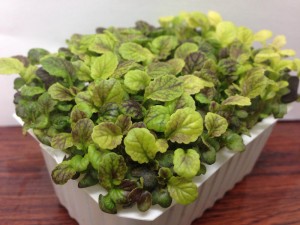 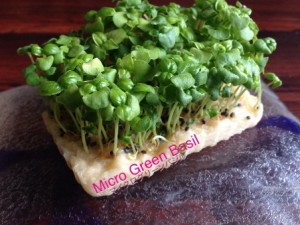 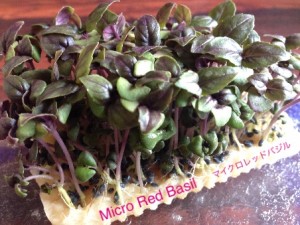 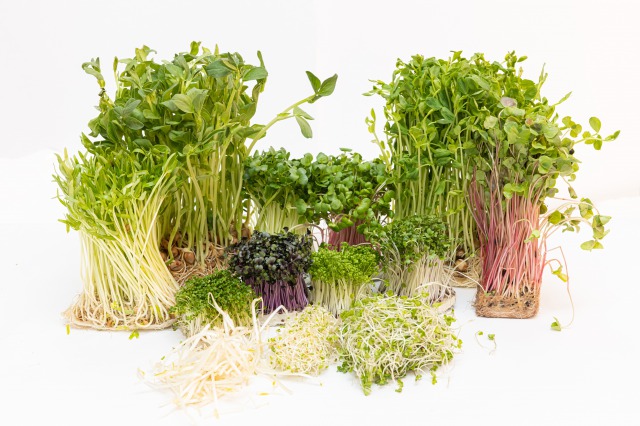 ※Posted text is a view from our company, It is not grower's point of view. Please do not use this information to others .
This text copyright belongs to Tagen Co.,LTD